Officials at Great Smoky Mountains National Park are seeking public comment on the Park's plans to transition the management of its elk herd from an experiment to a long-term management strategy. Under provisions of the National Environmental Policy Act (NEPA) the public has 30 days to provide comments before the National Park Service can make a decision. Comments will be accepted through September 27th. 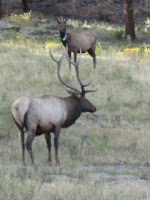 Elk were first released in the national park in 2001 as an experiment to determine whether they could re-populate the lands within the Smokies after a nearly 200-year absence. The Park and biologists from the University of Tennessee have been gathering data to assess the long-term viability of elk in the Smokies, along with evaluating the impacts of elk on the Park's natural and cultural resources, as well as their interaction with humans both in the Park and on surrounding lands.
Based upon the slow growth in numbers from 52 to about 125, including 25 new calves in 2010, officials have concluded that a sustainable elk population over the long term is viable. The Environmental Assessment is being performed to evaluate alternative strategies for making the transition from the management practices employed during the experiment release phase to a long-term elk management program.

The plan the park prefers would require less intensive monitoring of elk and would mean state and tribal wildlife agencies would handle issues with the animals outside the 500,000-acre park.

The public is invited to make comments, online, by clicking here, or sending written comments to:


Jeff
HikingintheSmokys.com
Posted by The Smoky Mountain Hiker at 9:38 AM

No experiment lasts forever. The elk reintroduction should now be considered a success. Let's change the elk management from an 'experiment" to "on-going management"
But most important, please comment.
Danny