If all goes as planned, sometime this week Jennifer Pharr Davis will begin her much anticipated attempt at breaking the overall Appalachian Trail speed record. Jennifer already owns the Women’s Speed Record for the fastest thru-hike of the A.T., setting the record in 2008 after completing the trail in just over 57 days. 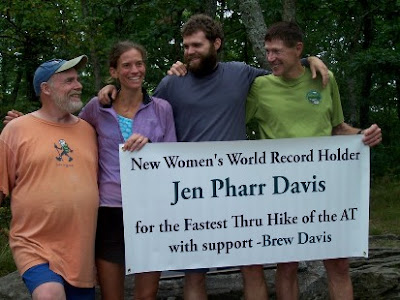 She plans on making a southbound hike on this occasion. Her start date will depend on trail and weather conditions in northern Maine, and she'll only depart from Mount Katahdin if there's a clear forecast.

As part of her strategy, when possible, she plans hiking up mountains and running down them. To get through her 16-hour days she'll consume at least 6,000 calories per day. This is 3 to 4 times what the average person typically consumes in a day!

As you might expect, Davis has generated quite a bit of publicity after making her formal announcement of the attempt back in April. Women's Adventure Magazine published a nice feature article on her in late May, and earlier in the week, National Geographic Adventure published an excellent Q&A with her.

I'm not sure how often her team will be providing updates, but she told me in an email that people will be able to keep up with her progress on her blog.


Jeff
HikingintheSmokys.com
Posted by The Smoky Mountain Hiker at 7:12 AM