l’Etape du Tour: Training for the Mountains of France

This is the second in a weekly series by guest blogger, Michael Lowe, leading up to his Étape Du Tour ride on July 11th:

Only eighteen days to go before I tackle l’Etape.

When I closed the introduction, I had deferred a description of Alpe d’Huez to this installment. That’s because it is probably the most celebrated modern finish in the French Alps. A relatively new addition to the Tour, it arrived in 1952, but it arrived with 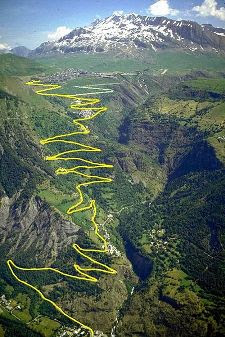 a huge splash. 1952 was the first year with televisions mounted on motorcycles. It was also the first time a stage had ever finished on a mountaintop. And the winner was Fausto Coppi, 5 time winner of the Tour of Italy and 2 time winner of the Tour de France. With 21 hairpin turns on its 13.8 km (8.6 miles) to a ski resort (avg gradient 7.9%), it is a climb made for television and movies. Add as many as one million fans (the number who were there when Lance Armstrong won in 2004), and you can see why it is such a success – and such an icon.

I’m looking forward to riding the same roads as many of my cycling heroes have ridden - Andy Hampsten, Bobby Julich, Levi Leipheimer, George Hincapie, and Joop Zoetemelk. Who? A Dutch rider who won in 1979. Out of the first nine times Alpe d’Huez was included, the winner six of those years was from the Netherlands – which has no mountains. Thinking of Joop gives me confidence that if he could do it, with no mountains upon which to train, I can make it!

Training. When you ready yourself for a hike do you train? Stairstepper at the gym? Up and down the library steps like Rocky? Through the neighborhood park with your pack on your back and everyone staring at you? (“Call 911 dear, it’s a homeless man in our park!)

My training started last fall. Instead of getting off the bike on November 1, I kept riding, trying to maintain as much of my base from the 2010 season as possible. Whenever the weather allowed, I was out on the road. In early February, tired of riding the trainer in my living room while watching old Tour video tapes on the television, I started looking for outdoor rides in North Carolina. My first was in Winston Salem, followed by one in Greensboro, and then Statesboro. One of the benefits of these rides is getting to see terrain and towns and roads I would never otherwise see. With fellow riders on the roads and a set course to follow, these “tours” proved to be great motivators for early season training.

By early April I was ready for some long rides and I signed up for Cycle NC – this year held in Oriental, on the Atlantic coast. 50 miles the first day and 70 miles the second, with the first half of the 70 head on into a 15 mph wind. My ability to finish both days in good shape gave me confidence that my early training was on target.

The rest of April and most of May was spent doing 40’s and 50’s as often as possible, keeping the speed in the 16 – 18 mph range, building endurance. However, most of my rides up to this point were flat or rolling. It was time for some mountains, and there are mountains all around where I work in Bristol, Virginia. On May 21 I set off from Bristol to Elizabethton, TN, and then turned north on US 19, slowly climbing up the 5.5% grade to Shady Valley, then hanging a left and climbing over the top of Holston Mountain. 70 miles with 4,000 feet of climbing in 4 hours and 15 minutes. Not too bad.

Next up – my first century of the season, followed by the big test – the Cherohala Challenge. But I’ll tell you about those next time.


Michael Lowe splits his time between Louisville, KY (his home) and Bristol, VA (his workplace). He's an avid cyclist, and also enjoys writing, photography, gardening, travel and hiking. He's hiked portions of the AT inside GSMNP, but completing a thru hike of the entire AT remains on his bucket list. His notes on l'Etape were written as a friend in support of this site, and we'd like to say thanks by pointing out that if you're a fan of adventure fantasy, we recommend Michael's books Wizardmont and Bryunzet

, the first two parts of his Promise of the Stones series. If you're a fan of history, check out Charlotte's Story, the true story of how Michael's mother survived as a young girl in Berlin, Germany between 1943 and 1951.


Jeff
HikingintheSmokys.com
Posted by The Smoky Mountain Hiker at 7:16 AM