The winter of 2010/2011 was an historic one for Glacier National Park. A park press release at the end of April reported that USGS snow surveys measured 106 inches of snow on the ground at the 5,900 foot level near Siyeh Bend on the Going-to-the-Sun Road. A whopping 166 inches were recorded at the 7,000 foot level!

Here are two NPS photos showing the massive plowing project on the Going-to-the-Sun Road this past spring. Would you want this job? 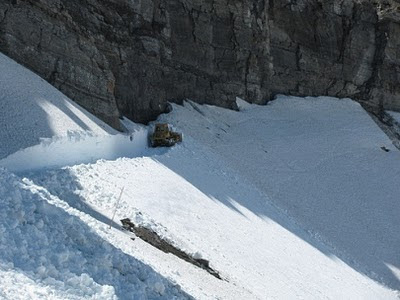 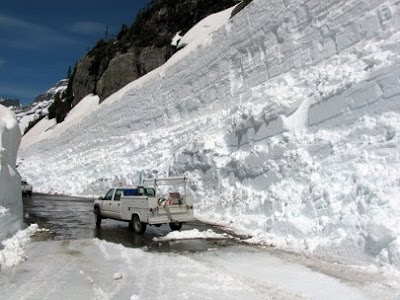 All that snow resulted in a couple of historic avalanches.

One avalanche that received quite a bit of notoriety delivered a serious blow to the historic Sperry Chalet. The backcountry hotel, accessed only by a 6-mile hike, sustained a fair amount of damage, and resulted in a truncated tourist season this summer.

The avalanche slid off Lincoln Peak sometime during midwinter and plowed into the south end of the stone dormitory building. Snow and debris damaged the roof, broke a door, took off some shutters, and blew open windows. Four rooms on the interior were completely filled with snow. The damage delayed the opening, and forced an early summer closure as crews worked to complete repairs before another winter set in.

Here's what the chalet looked like in April in this NPS photo: 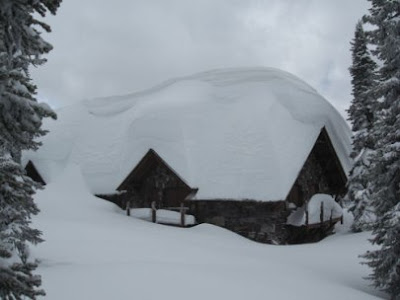 Here's what it looked like during our visit in mid-August: 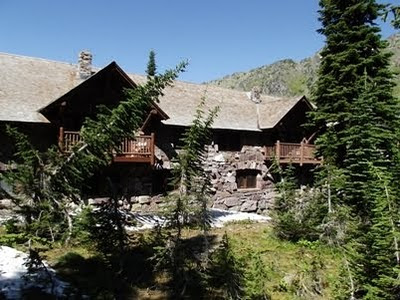 Just a hundred feet up slope from the chalet the remains of the avalanche were still on display. Notice how most of the trees are still bent or were snapped off: 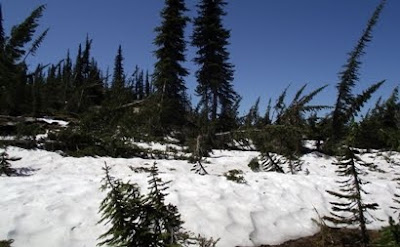 Another significant avalanche occurred on the other side of Gunsight Pass, not far from Sperry. The avalanche, just below Gunsight Lake, resulted in hundreds of trees being snapped off only a couple feet above the ground. We hiked this trail in September and had to bushwhack through a section of trail, more than a tenth of a mile long, that was choked with dead trees and crushed willows. Underneath the debris, still at this late date, were several feet of packed snow and ice. 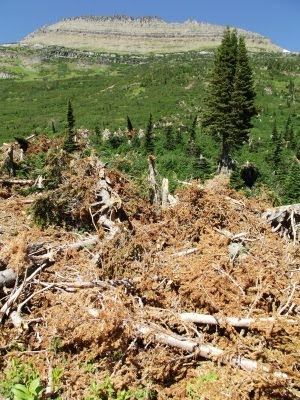 While climbing through the debris I noticed this ice bridge: 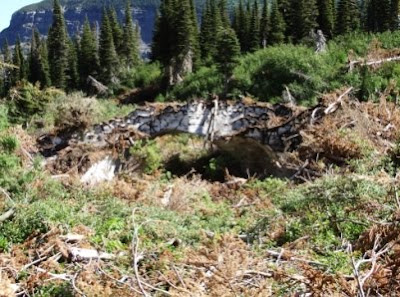 I’m not sure how long it will take the park to clear the obstruction, but it’s likely to be there for awhile. As a result of heavy lingering snow, the trail over Gunsight Pass was not even expected to open in 2011. Jeff
HikingintheSmokys.com
Posted by The Smoky Mountain Hiker at 8:09 AM