The Appalachian Trail Season Kicks Off

It’s that time of year again. Days are finally just beginning to get a little warmer, flowers are starting to pop-up in the lower elevations of the southern mountains, and Appalachian Trail thru-hikers are starting to pound their first steps out of Springer Mountain as they make their way towards Mount Katahdin in Maine.

One such hiker, Time Outdoors, a 35-year-old civil engineer from North Carolina, began his trek on America’s first national scenic trail this week. After satisfying a craving for pancakes at the Amicalola Falls State Park Lodge on Monday morning, Time Outdoors made his way to Long Creek Falls for his first night out on the trail. Although he had to battle the leftovers from the snow and ice storm that hit the region over the weekend, warmer temperatures are expected for the next several days. 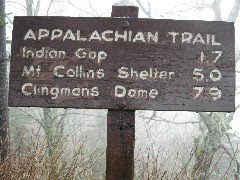 Hiking the Appalachian Trail has always been a goal of his, something he thought he would do after retirement. However, with the current economic and job market conditions, he decided to strike out for the trail now.

He stated on his blog that he wants to spend time improving his photography skills during his travels. He plans on taking several side trails to photograph waterfalls and wildflowers, especially in North Carolina, Tennessee, and Virginia.

Based on the pictures he’s already posted on his website, you can tell he has a good photographic eye.

He’ll keep the world informed of his progress by posting updates on his blog using his cell phone. You can follow his journey over at his blog: http://timeoutdoors.blogspot.com.

Smoky Mountain Day Hikers Store Quality gear and apparel from some of the best outdoor brands.
Posted by The Smoky Mountain Hiker at 9:46 AM