For anyone interested in following along, there’s a Scottish cyclist who just embarked on a trek to ride from Alaska to the southern tip of the Andes in Argentina. 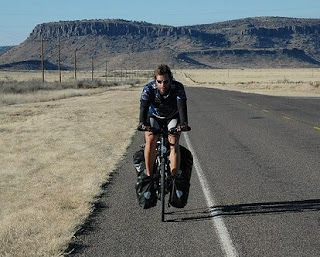 And, just for good measure, he also plans to climb 20,320-foot Denali (Mt. McKinley) and 22,834-foot Aconcagua along the way, the highest mountains in North and South America.

Mark Beaumont, who holds the world record for the fastest circumnavigation of the globe on a bike - a ride of 18,296 miles in just 195 days in 2007/2008 - will cycle across the longest mountain range on the planet, the American Cordillera which runs from the Alaskan Ranges to the Andes of South America. His journey will take him through 15 countries including the United States, Canada, Mexico, Guatemala, El Salvador, Panama, Colombia, Peru and Argentina.

In the months ahead, Mark will be covering more than 15,000 miles along the Trans-American Highway. His entire adventure is being filmed by the BBC for an upcoming television show. He hopes to finish by February 2010.

You can follow along with his adventure by clicking here.

Speaking of Aconcagua, there’s a nice article in Men’s Journal about climbing this mountain. They describe the mountain as being one of the most accessible of the seven summits. Click here for the article.

Posted by The Smoky Mountain Hiker at 11:08 AM