Before I begin posting hike reports from our Rocky Mountain National Park trip, I wanted to give you all a short overview of the park. Our recent trip to the Rockies marks my seventh visit to the park in the last 20+ years.

Anyone who’s ever been to this magnificent park in Colorado can surely identify, on some level, with John Denver’s lyrics. 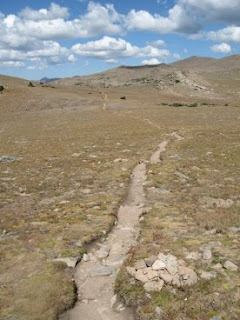 With roughly 360 miles of trails, the park is an absolute hiker’s paradise. Altitude in the park ranges from 7500 to 14,259 feet and slices through montane, sub-alpine and alpine zones. Ecologically speaking, a drive up Trail Ridge Road effectively takes you to the Arctic Circle – and will definitely feel like it on most days.

Trail Ridge Road is also the highest paved road for any national park in the United States, cresting at 12,183 feet before it crosses the Continental Divide when driving towards Grand Lake. It was opened to the public in 1932. Prior to its completion, Horace Albright, director of the National Park Service, predicted; "It is hard to describe what a sensation this new road is going to make. You will have the whole sweep of the Rockies before you in all directions." 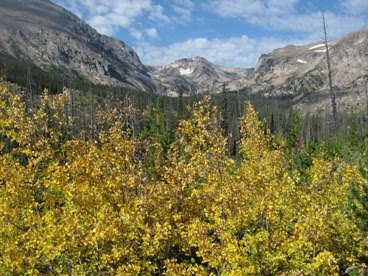 One-third of the park is above tree line. Besides the incredible scenery, the park is famous for the aspens that turn a brilliant golden yellow in the fall, as well as the hundreds of elk that congregate in the Moraine Park area during the rut season. 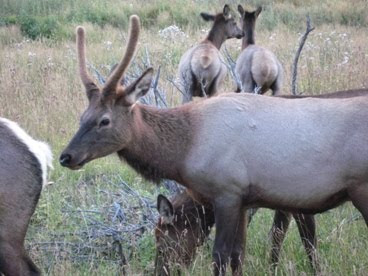 The first settlers to move into the area arrived in 1860. Joel Estes, a Kentuckian, and his son Milton, rode into the valley that bears their name the year before while scouting for game. The father and son decided to return after climbing a high promontory that gave them a commanding view of the breathtakingly beautiful valley.

I was a bit confused the first time I visited Estes Park back in 1986. I expected to see a town or county park of some type. Instead, I found an actual town. I didn’t understand the use of the word “park”. It wasn’t until later that I discovered that Coloradoans refer to large, high-elevation meadows and grass basins, as parks. Thus the source of the names such as Estes, Woodland, 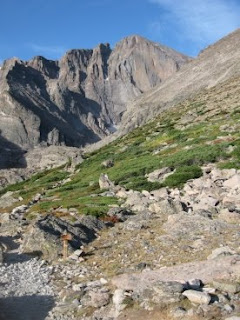 Winter, and even South Park, which is located about 50 miles west of Colorado Springs.

In the years that followed, the Rockies attracted various adventurers, including the great explorer John Wesley Powell who, in 1868, conquered Longs Peak, the highest point in the park. Just five years later, Anna Dickinson became the first woman to succeed in making the climb.

Isabella Bird, an Englishwoman whose extensive travels and writings earned her the first female membership in the Royal Geographic Society, visited Estes Park in the fall of 1873. She fell in love with the area and published a book; A Lady's Life in the Rocky Mountains. This began attracting tourists to the area.

In 1903, F. O. Stanley, inventor of the Stanley Steamer automobile, came to Estes Park for his health. Impressed by the beauty of the valley and grateful for the improvement to his health, he decided to invest his money and his future there. In 1909, he opened the elegant Stanley Hotel. 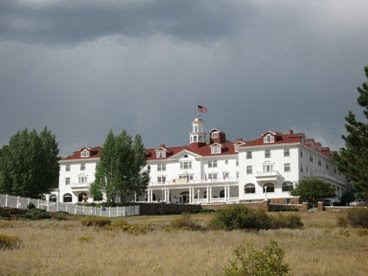 The hotel became famous in recent times when novelist Stephen King found his inspiration for "The Shining" after staying in an almost empty hotel on the night before it closed for the winter. Although the hotel wasn’t used as a backdrop for the movie, it was used for the three-part 1997 television miniseries.

On January 26, 1915, President Woodrow Wilson signed legislation that created Rocky Mountain National Park, and in 1976, the park received recognition from the United Nations as an international Biosphere Reserve.

Our most recent trip to the Rockies was certainly the rainiest and the coolest we've experienced in Colorado. It rained every single day we were there. Although we had a window of very pleasant weather each morning, it felt like rain, or the threat of rain, was chasing us out of the wilderness each day. By the end of the week it got so cold that it snowed in the upper elevations, requiring us to make a few adjustments to our itinerary. 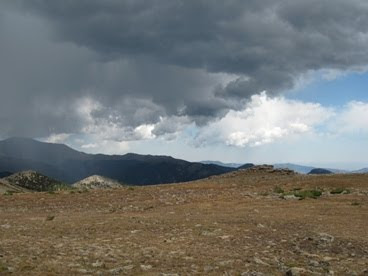 All in all though, we still had an excellent trip with some outstanding hiking.

Tomorrow I will be posting my report and pictures from our hike to Lake Helene and Odessa Lake.

If you want to see some absolutely stunning photography of the mountains of Colorado, check out Colorado II by world renowned photographer, David Muench: 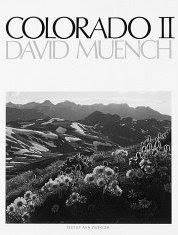 > Please click here to see a summary of trail reports and photos from our hikes in the Rockies.

Excellent write-up on the history of the Rocky Mountain National Park. I haven't been there in awhile so will need to take a trip soon :)

Thanks Hiking Lady! In the meantime, hopefully I can take you there vicariously with my hike reports and photos over the next several days!

Hi,
Nice overview of Rocky Mountain National Park..I like it.... Nice pic....Thanks for posting this information of nation park...