Update on the Calderwood Fire in western Smokies

Great Smoky Mountains National Park and the Tennessee Department of Forestry continue to keep a watchful eye on a low-intensity wildfire burning between U.S. 129 (The Tail of the Dragon) and the shores of Calderwood and Chilhowee Lakes (see map below).

Since Monday, the fire has grown from 160 acres to 294 acres as of early this morning. However, the fire is now 52% contained.

According to InciWeb, the fire is moving northward into an area of sparser fuels. Engine crews were able to construct a handline on Park land and tie into an old road on Tapoco (Alcoa) lands to the west. The fire will continue to burn down until it hits this handline.

The fire remains within all control lines and does not currently threaten Highway 129.

The Calderwood Fire is believed to have been started by a lightning strike on August 17 on land owned by Tapoco, but was first detected and confirmed on August 22. Since then it has spread slowly onto national park property.

The following is a map that shows the location and the progression of the fire (you can click on the map for a closer view): 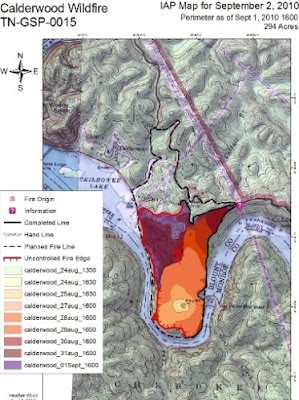 The fire is expected to be fully contained by September 9th.


Jeff
HikingintheSmokys.com
Posted by The Smoky Mountain Hiker at 9:18 AM