The Top of Texas

After staying in Van Horn the night before, we made the 60-mile drive north in the early morning darkness. My goal was to arrive just outside of Guadalupe Mountains National Park in order to a get a photo of El Capitan just as the sun begins to shine on the dramatic rock face of the mountain that stands at the southern terminus of the Guadalupe range. 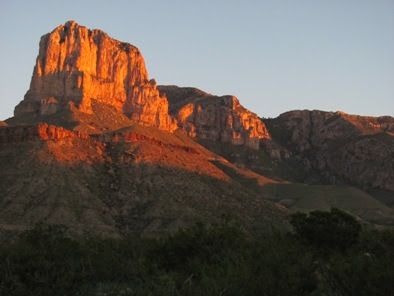 With an elevation of 8,749 feet, Guadalupe Peak is the highest point in Texas, and, is the 14th highest state high point. It’s also one of only four state highpoints that’s located within a national park - Denali, Mount Rainier and Clingmans Dome being the other three.

The hardest part of the hike is at the very beginning in which the trail ascends a series of switchbacks over the course of the first mile-and-a-half or so. Hikers can use the parking lot and the highway far below to gauge their progress.

During this first section the trail climbs the east face of the peak, which means hikers are fully exposed to the hot desert sun. I highly recommend starting this hike before sunrise in order to knock-out as much of this section as possible during the relative cool of the morning. It's also a good idea to start early so that you’ll have time to get off the mountain before summer afternoon thunderstorms arrive. 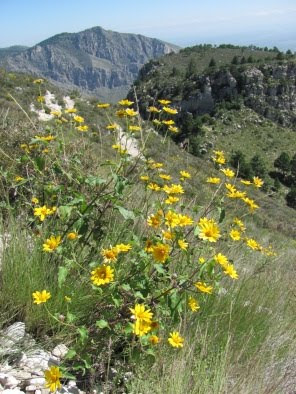 At roughly 7000 feet in elevation, and 1.7 miles from the trailhead, the trail skirts a relatively narrow ledge. Although not exceedingly dangerous, you'll still want to take your time through this short section of trail. Just beyond this point the switchbacks mercifully come to an end (although they'll inflict more pain on the way down). Soon the trail winds around the other side of the mountain and reaches some much appreciated shade. From here the grade became much easier and remained relatively moderate for the rest of the hike. 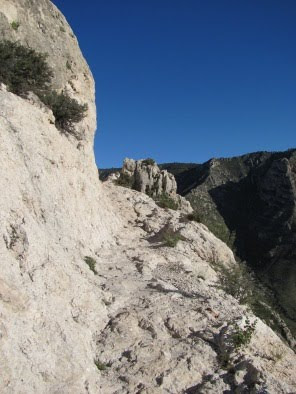 As we traveled upward we saw numerous Northern Harriers flying just above us. Up at the summit we also saw a few Golden Eagles and a couple of Peregrine Falcons soaring and gliding on the thermal updrafts.

At the second cliff section: 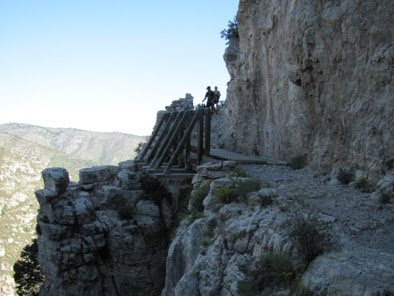 The photo above includes a young man from New Zealand and his girlfriend getting ready to cross the highest bridge in Texas. Just days before a 7.1 magnitude earthquake hit near his hometown just outside of Christchurch. It took a day or two, but he finally received confirmation that his entire family was alright. He said his dad, who happens to be a building inspector, was keeping extremely busy in the aftermath of the quake. Coincidentally, the young Kiwi just happens to work as a rafting guide on the Pigeon River in Tennessee.

Just past the bridge we began the final climb to the top. Over the last quarter mile route finding became a little difficult. We made the same mistake a guy in front us made by missing the trail as it heads-off towards the right. Consequently, we took a route that required a little bit of scrambling. No big deal, it just would’ve been easier had we stayed on the main trail.

At the summit is a stainless steel memorial that was erected by American Airlines in 1958 to commemorate the 100th anniversary of the Butterfield Overland Mail Route, a 2800-mile stagecoach route that passed on the south side of the mountain. On one side of the pyramid is the American Airlines logo. Another side displays a U.S. Postal Service tribute to the Pony Express Riders of the Butterfield Stage. The third displays a compass with the logo of the Boy Scouts of America. 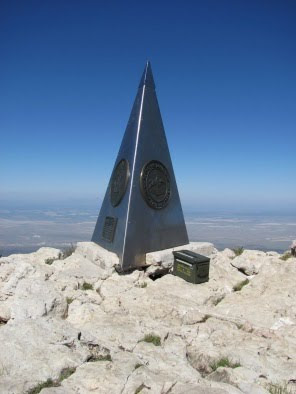 From the summit we could see a line of thick high clouds extending from one end of the horizon to the other in the far off distance (they say you can see more than 100 miles away). These were likely the leading bands of Hurricane Hermine that was pummeling central and east Texas that day.

Although the hurricane had no impact on our hike, hikers should always expect high winds on the mountain – especially during the winter months when winds can exceed 80 MPH on a fairly regular basis.

Looking towards the north from the summit: 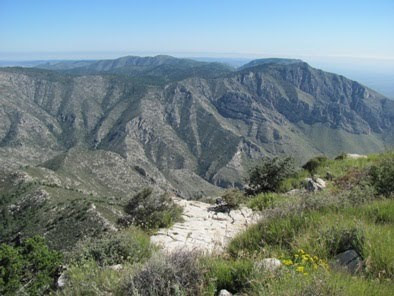 Looking down on El Capitan and Highway 62/180 far below: 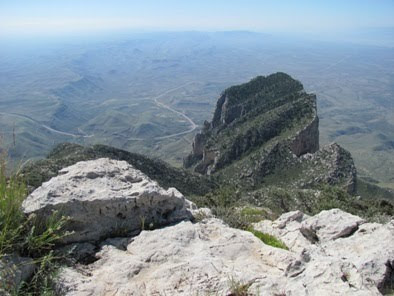 The park also recommends that you take a full gallon of water. I only took about 100 ounces, thinking that would be enough given the relatively cool weather that day. I barely had enough, however. During peak summer months I would definitely take the parks’ recommendation of one full gallon.

One final note about this part of the country: After our hike we had planned to attend the Evening Star Party at the McDonald Observatory 65 miles south of Van Horn. Every Tuesday, Friday and Saturday the observatory invites the public to view the universe through 16 and 22-inch telescopes located atop Mount Locke and Mount Fowlkes (6300-6800 feet). The observatory in the remote Davis Mountains offers some of the darkest night skies in the continental United States. Unfortunately Hurricane Hermine wasn’t going to allow that to happen that night. As the early evening progressed the clouds continued to thicken, so we decided to cancel our plans. However, we did hear a lot of great things about the program and sounds like it would be a great excursion if you’re in the area.

Guadalupe Peak is one of my favorite hikes. No matter how much time I spend here...the Guadalupe Mountains seem to keep calling me back. I'm glad you enjoyed your hike to the top of Texas. Its a different kind of rugged out here.

I got the chance to go to a McDonald star party at the observatory back in May. Looking at Saturn through one of their huge telescopes was something else. If you ever make it back this way I highly recommend it.