Betty White is made an honorary forest ranger

After conquering Saturday Night Live earlier in the year, Betty White was made an honorary forest ranger by the U.S. Forest Service today.

White said in previous interviews that she wanted to be a forest ranger as a little girl, but that women were not allowed to do that then. During the ceremony at the Kennedy Center for Performing Arts, U.S. Forest Service Chief Tom Tidwell remarked that despite those challenges, she found ways to make a difference in conservation and animal welfare.

"I am sorry you couldn't join us before," said Tidwell. "Judging from your illustrious career, you would have made marvelous contributions to our agency and to the cause of conservation across the United States," he said. "Betty, you are a role model for little girls – for all of us – never to give up on our dreams." 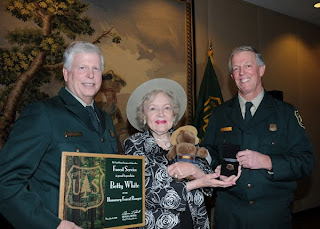 So what's next for Ms. White? Secretary-General of the U.N.?

You can read the rest of the press release by clicking here.


On Sale - Women's Softshell, Fleece, Down & Rain Jackets Up To 50% Off At Backcountry.com. Valid While Supplies Last.

Jeff
HikingintheSmokys.com
Posted by The Smoky Mountain Hiker at 5:46 PM