National Geographic now has two separate Trails Illustrated Maps for the Great Smoky Mountains - in addition to the old map. National Geographic has divided the Park in two, thus allowing each map to show much greater detail. The original map, which covered the entire Park, had a scale 1:70,000. The two new maps now have a scale of 1:40,000 (1” = .6 miles) and provide much greater detail such as backcountry campsites, footbridges, fords and stream crossings, nature/interpretive trails, as well as detailed trail mileages.

The map for the western section of the Park includes the Cades Cove and Elkmont areas.

The map for the eastern section includes Clingmans Dome, Mt. LeConte and the Cataloochee areas.

Coverage Highlights Areas and places featured in this map series include: the Appalachian Trail, Benton Mackaye Trail, and the Mountains-to-Sea Trail. The maps also include scenic overlooks and roadside pull-outs.

Of course the original map, which covers the entire Park, is still available. 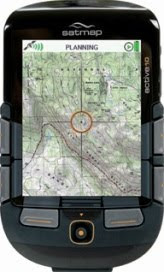 The Active 10 TREK comes pre-loaded with World and USA Base Maps. Customers can purchase a variety of Nat Geo SD Map Cards that slot into the GPS, making map reading fast and easy. The map is displayed on a large 3.5” screen in full color suitable for day and night use, including a red backlight option to help protect night vision.

The Great Smoky Mountains National Park is included on each of the Southern Appalachians, National Parks and the North and South Carolina SD Map Cards.