U.S. Forest Service investigators are offering a $1,000 reward for information that leads to the conviction of those causing a wildfire in the Red River Gorge. The men in the photographs below are believed to be two of three individuals responsible for the fire that has closed nearly 3,000 acres on Auxier Ridge. The Forest Service is seeking help in identifying these men. 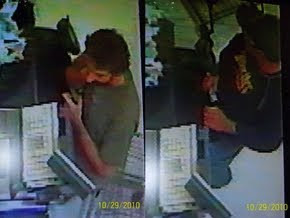 The wildfire was discovered in the early morning hours of Oct. 24. The fire was set during a declared fire ban. Forest Service law enforcement officers observed three individuals fleeing from the scene. They escaped in a car parked below the ridge at Nada Tunnel on Highway 77.

To date, the fire has burned twelve hundred acres, has closed 25 miles of trails, and has resulted in hundreds of thousands of dollars being spent to fight the blaze.

Back at the site where the men were camped, officers found a receipt of purchased items that matched those at the scene. The receipt is from a Walmart in Dry Ridge, Ky. Security cameras captured photographs of the individuals purchasing the receipt items.

Camping gear, clothing and other personal items were abandoned at the campsite where the wildfire started. Fingerprints are being taken from the recovered items.

“The suspects are encouraged to come forth,” said Patrol Captain Kimberly Kipp. “Their cooperation with law enforcement will be considered during prosecution if they come forward now.”

The Auxier Ridge area of the gorge, including roads and trails, remain closed. A portion of Highway 77 from Nada Tunnel to the Martins Fork parking area remains closed due to falling tree hazards.

Anyone who can identify the men in the photographs or has other information is asked to contact Kipp at 606-875-5042.


Jeff
HikingintheSmokys.com
Posted by The Smoky Mountain Hiker at 9:33 AM