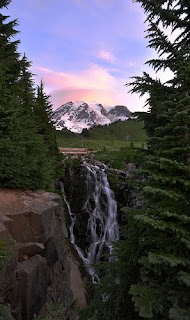 Yesterday the National Park Service announced the results of the National Historic Landmark Photo Contest. Winners were chosen from a record number of entries.

The winning photograph for this year was “Mount Rainier in the Morning” by Matthew Bell of Olympia, Washington. The photo is described as:

Under a sky of periwinkle blue and pastel pink, the bulk of Mount Rainer, with its gray face swathed in snow, slopes gently downward toward the lush meadow that occupies the middle-ground of the photograph. In the foreground, a waterfall’s “pale streams,” spectral and smoke-like, course down a wall of rock.

Twelve photographs received honorable mentions in the annual contest. You can view each of the winners by clicking here.


Jeff
HikingintheSmokys.com
Posted by The Smoky Mountain Hiker at 7:19 AM