An interesting study was published this month in the Journal of Mammalogy showing that bears in Yosemite break into minivans more often than any other vehicle. The study suggests minivans are often owned by families with children who spill food and drinks There's also the possibility that there's a stash of food in the vehicle as well.

Scientists were inspired to study the phenomenon several years ago when they noticed that minivans in Yosemite had more windows pried open and broken than any other vehicles.

The study gathered information on vehicles broken into by bears by accessing records from the incidence database from 2001 through 2007. From 2004 to 2005 the study also measured availability of vehicles by recording the make and model of a sample of vehicles parked overnight in the parking lots of Yosemite Valley. They also classified vehicles into 9 categories based on their make and model 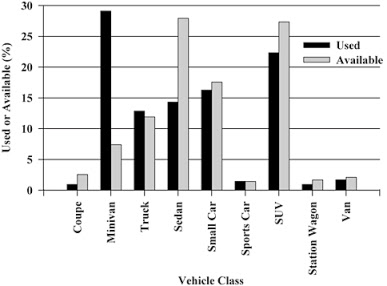 The analysis discusses several competing hypotheses about why bears selected minivans during the study. They include:

* Minivans may emit stronger food odors, regardless of how much food is present inside. (possibly from small children who spill food and drinks).

* Minivan passengers may leave more food inside their vehicles (Most vehicles broken into have some amount of food or trash inside. Since all Yosemite visitors are required to use food lockers it's unclear why minivan owners would not abide by this rule more than others.)

* Minivans may be physically easier to break into.

*A few individual bears may have learned to repeatedly break into minivans for a better payoff. Black bears forage selectively to balance energetic and nutritional gains with foraging costs. Selection of minivans by bears in Yosemite is possibly an effort to maximize caloric gain and minimize costs by targeting vehicles with higher probabilities of payoff.

Although the study couldn't conclusively determine why bears raided minivans more than other vehicles, I thought the results of the study were very compelling.

You can read the full report by clicking here.

Posted by The Smoky Mountain Hiker at 9:13 AM