First off, let me say that I've thoroughly enjoyed National Parks: America's Best Idea. Prior to this week's broadcast, I wasn't really sure what to expect. I assumed the film would be a contemporary overview and an expose of stunning photography from the national parks. However, the film focused much more on the historical development of the national parks and park system itself. As a history buff, I'm glad Mr. Burns decided to go in this direction.

Throughout the week I certainly learned a lot. For example, I didn't realize the immense role that Horace Albright played in the formation of the modern National Park Service, as well as the acquisition of new parks during his tenure.

I also thought Mr. Burns did a fairly decent job with his overview of the Great Smoky Mountains. 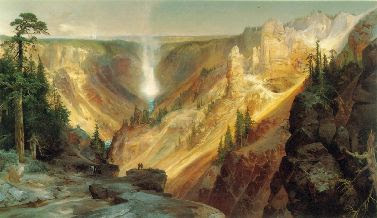 Having said all that, I do have a couple of nitpicking criticisms.

1) I thought Burns spent a disproportionate amount of time on Yosemite. I agree that Yosemite is stunningly beautiful and probably deserves more time than the average park, but it came at the cost of glossing over other major parks, namely Olympic, Glacier and Rocky Mountain National Parks. Burns favoritism for Yosemite reminded me of the way he overwhelmingly favored the New York Yankees in his otherwise excellent Baseball film. As a Cincinnati Reds fan it was just a little too much!

2) One other criticism, albeit small, is that I wish that PBS didn't have to run two-hour broadcasts of the film on six consecutive days. Towards the end of the week it started to feel like I was taking part in a marathon. I wish they would stagger programs like this across two or three weeks. Maybe do four three-hour segments over the course of two weeks, with a five minute intermission at the half-way point on each night.

Despite these, I do think that the film will result in a fairly major spike in national parks visitation next year. I'm certainly even more inspired now to visit many of the parks that have been on my list for some time.

What do you guys think? Did you like the film? Did you learn anything compelling? Do you think the Smokies were treated fairly?

If you're wishing to add to the film experience, below is the companion book (42% off) and the DVD (30% off) from Amazon:

Posted by The Smoky Mountain Hiker at 9:05 AM

I thought it was about 4 hours longer than it needed to be - the pace was too slow, and they went into too much detail over seemingly little things. But, overall, I did like it and I learned a few things. I appreciated the historical stories about how Yellowstone, Yosemite, and Grand Canyon came into being. But you're right, they did spend too much time on the "crown jewels" and not enough on the crown. I normally don't watch much TV, so it was a struggle for me to sit there for two hours on six consecutive nights. Your idea of spreading it out would have been better.

I was also inspired by this movie. I didn't even think it would be available on netflix so I sat through commercial-less hours. But I loved it. I live 30 minutes from Rocky Mountain and took it for granted. Now I want to see all of the national parks. I"m completely inspired by all the historic people Burns talks about. Amazing people.

PS It's now in my netflix queue. I can watch it over and over