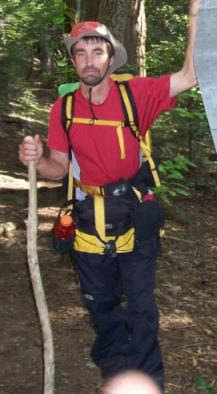 I received an email this afternoon from Peter Barr of NC Lookouts, asking me to post this information.

Apparently a hiker has gone missing. I say apparently because there's a posibility he went missing while not hiking as well.

Here's what's known about the situation and his itinerary based on Peter's email:

Hiker John Meisenhelder, 46, of Wilmington, NC, a member of the Triangle Outdoors Hiking Club, has been reported missing in the vicinity of the Great Smoky Mountains National Park. He departed Friday, intending to hike numerous waterfalls in the Great SmokyMountains National Park and Nantahala National Forest. He did not leave a specific itinerary, but his general goal was to visit Ramsey Cascades, Rainbow Falls and Grotto Falls in the park, then drive to North Carolina to hike Middle Falls in the Snowbird Wilderness. He then intended to hike to Juneywhank Falls, Indian Creek Falls, and Alarka Falls in the Bryson City area.

The last confirmed contact was made on Saturday in Gatlinburg. On Saturday, he reported car troubles to his wife and purchased tires in Sevierville,TN. He was due home on Sunday night but did not return nor has he been heard from since. Debit card transactions reveal small purchases at fast food restaurants and gas stations in Robbinsville, NC on Sunday, in Franklin, NC on Monday, and Cashiers, NC on Tuesday. It is unknown if it is Meisenhelder who has been making these charges. His wife reports that lack of communication beyond a day's time has never occurred in the past.

A missing persons report has been filed and authorities in both the Great Smoky Mountains National Park and in the Nantahala National Forest have swept trailheads for all of his intended waterfalls and did not find John's vehicle. Meisenhelder is an experienced hiker and waterfall hunter. He is 5'7"and 135 lbs. with brown hair. He was driving a green Nissan pick-up truck with North Carolina Appalachian Trail specialty plates "TENT".

If anyone has encountered Meisenhelder on any of the trails in North Carolina or Tennessee, or anywhere else in the past several days, or has seen his vehicle, please call the Graham County NC police department at (828) 479-3352 immediately to share information on this missing person.


Jeff
HikingintheSmokys.com
Posted by The Smoky Mountain Hiker at 3:20 PM

Thanks to everyone who spread the word and/or kept an eye out for John. THOG has heard from John's wife, and he has been found, in good health.