During the late summer of 2001, Kathy and I spent our vacation in Yellowstone National Park. One of our prime hiking destinations for the week was a climb up 10,566-foot Avalanche Peak, located about eight miles from the park’s east entrance. We put this hike at the top of our itinerary because it’s one of the higher peaks in Yellowstone, and it didn’t require any technical skills to reach the summit.

Instead of the pleasant weather we had experienced over the previous few days, we were greeted by dark threatening skies the morning of this particular hike. We decided it might be a good idea to stop at the Fishing Bridge Visitor Center to get an updated weather forecast before setting off.

The ranger at the visitor center, although friendly and very helpful, dampened our spirits even more. Not only was there a good chance of rain for the day, but she also warned us about the high level of grizzly bear activity in the Avalanche Peak area. Indigenous to this part of the park are whitebark pine trees, which, in late summer, produce seeds that are rich in fat. The seeds are one of the preferred foods for grizzlies as they fatten-up for the winter, thus attracting them to this area during the late summer and fall.

At this point we were a bit leery about our prospects for hiking this trail.

Maybe we sound like a couple of “Chicken Little’s”, but being from the Midwest we’re not really accustomed to hiking in areas where we’re second on the food chain. Hiking in black bear country doesn’t bother me, but grizzlies definitely make me nervous. Despite our limited experience in grizzly country, we were aware that hiking in numbers tends to increase the safety factor. We decided to drive up to the trailhead to see how many cars were in the parking lot. If it looked like we were going to be the only hikers on the trail that day, we decided we would look for another trail elsewhere in the park.

We were relieved to see several cars in the parking lot at Eleanor Lake.

However, as we began packing our lunch and gear, it started to drizzle. The drizzle quickly turned into a downpour. For nearly a half-hour we waited in our car until the clouds finally started to break. Just as the rain was ending, another couple pulled into the lot next to us. We thought this to be a good omen. With the additional company on the trail, we felt a little more at ease about hiking in grizzly country.

We set off with our new friends in a light misty drizzle. Our companions, we found out, were a couple of summer park employees working in the Mammoth Hot Springs area. What a great way to spend your leisure time while working in one of the most beautiful places on Earth. 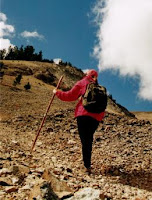 Almost immediately the trail begins ascending the mountain, climbing through a dense, lush-green forest of spruce and fir trees. Even though the trail isn’t marked on the official park map, it appeared to be well maintained and was clearly visible along the entire route.

As the trail steepened, the pace of our companions started to slow, so Kathy and I moved on without them. By this time it was becoming increasingly apparent that the hike up Avalanche Peak isn’t for the faint of heart. The trail gains 2100 feet in just 2.5 miles, which translates into a grade of nearly 16%! To make matters worse, the trail is characterized by a lack of switchbacks, which means there aren’t a lot of flat sections to rest legs and lungs as you make your ascent. 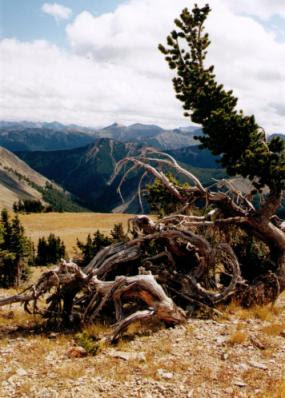 About a half-mile from the summit we reached a meadow right above the tree line - just at the base of the bowl under Avalanche Peak. We noticed four hikers descending the mountain about 150 yards up the trail from where we stood. About 200 yards above them, I saw what I assumed to be another hiker, dressed in brown from head-to-toe, cross over the trail. It took me a second or two to realize that what I was actually looking at was an adult grizzly bear moving towards the east. I yelled a warning to the four hikers between us and the bear. The bear also heard me and looked a little startled as he stopped to check us out. 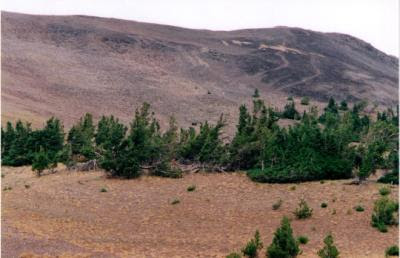 The summit of Avalanche Peak is in the far right corner of picture. That small dark spot right in the middle of the picture, just above the copse of trees, is the grizzly bear.

At this point we were a little undecided as to what to do next. Do we turn around and head back down the mountain, or do we move up the trail to join the company of the other hikers for more safety? As we stood there mulling over our options, the bear suddenly became visibly agitated with my wife and I. Abruptly, he crouched down on his front legs and faced directly towards us. There was no misunderstanding his body language or the menacing glare he gave us; he wanted us off HIS mountain! Not to offend him further, we calmly started to back away. Fortunately, so did the bear. Just as quickly as he faced us down, did he turn away and continue his eastward procession towards a grove of scrub pines. The bear was obviously more interested in stuffing his belly with pine seeds rather than a couple of hikers.

Feeling a little bolder, we walked up the trail to join the other hikers while we watched the bear indulge in a favored delicacy. After watching for several minutes, the two park employees we met earlier finally joined us. As we all stood there, the bear finally wandered over to the other side of the mountain. We now had another important decision to make: do we take the safe route down the mountain with the group of four, or do we go ahead and summit the mountain with our park employee companions. Our high altitude conference concluded that if all four of us stayed together it would be relatively safe to continue on.

Our decision to move forward proved to be an excellent one. With our periodic clapping and yelling of “hey bear”, much to our relief, we never saw the bear again. Even the weather cooperated with us. The overcast, drizzly conditions we experienced on the lower part of the mountain now gave way to billowing white clouds against the backdrop of a cobalt-blue sky. The final push to the top was a fairly easy scramble along the rocky ridgeline of Avalanche Peak. At the summit we were rewarded with an incredibly spectacular view of Yellowstone Lake to the west, the Absaroka Range to the north and east, and the Grand Tetons in the far off distance towards the south. 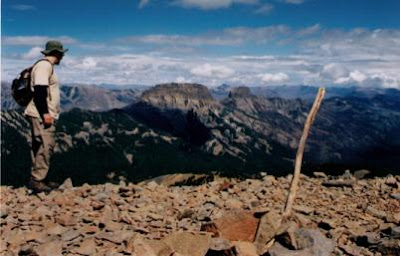 I’ve made several trips out west over the years and have had the opportunity to hike in some of the best parks and wilderness areas in Colorado, Utah, Montana and Wyoming. Not only was our trek up Avalanche Peak the highlight of our Yellowstone trip, but was undoubtedly one the most memorable hikes I’ve ever had. The combination of stunning scenery and the chance encounter with a grizzly bear made this a wilderness experience of a lifetime.

Posted by The Smoky Mountain Hiker at 8:38 AM