The Passing of the Torch: Blue Ridge Parkway 75th Anniversary

Next weekend the Blue Ridge Parkway will kick off its 75th anniversary celebrations with several historical and symbolic events. The official anniversary, however, is actually next year. 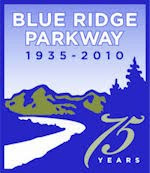 Friday, Nov. 13, on the Blue Ridge Parkway outside Cherokee. A torch will be passed from the Great Smoky Mountains National Park, which celebrated its 75th anniversary this year, to the Parkway. Both park superintendents and Eastern Band of the Cherokees’ tribal leaders will deliver remarks. The ceremony will be held at 10 a.m.

Other events this weekend include:

* A program called “Natural Resource Stewardship – An American Indian Legacy and Model for Our Future” will be held at 6 p.m. Thursday, Nov. 12, at the Cherokee High School. Talks will be given by Gerard Baker, superintendent of Mount Rushmore National Memorial who was featured in Ken Burns recent national parks documentary, along with former and present superintendents of the Parkway, Dan Brown and Phil Francis.

* Guided history tours in partnership with the Museum of the Cherokee Indian will be given by Cherokee storytellers at noon on Friday, Nov. 13, with several stops along the southern portion of the Parkway. Cost is $20 per person and includes a boxed lunch. 828.497.3481.

* Parkway History Day will be held on Saturday, Nov. 14, at the Folk Art Center on the Parkway outside Asheville.

* A benefit concert featuring Nanci Griffith will be held on Saturday, Nov. 14, at 7 p.m. in Asheville. There will be a performance of the one-time-only collaboration of The Blue Ridge Bluegrass All-Stars showing their support for the Parkway, including renowned musicians: Doyle Lawson, Sammy Shelor, Bryan Sutton, Tim Surrett, and Jim Van Cleve. The Cherokee Warriors of AniKituhwa will also perform, and the entire evening will be hosted by Asheville’s own Grammy award-winning musician David Holt.

You can find more information on each of these event at the Blue Ridge Parkway 75th Anniversary website.