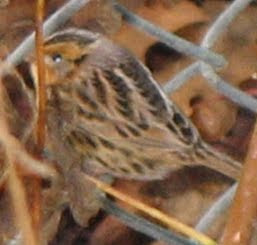 The latest issue of the Cub Report from the Great Smoky Mountains Association is reporting the first documented sighting (and only the second siting ever) of a Le Conte's sparrow inside the Smokies. It was spotted and photographed (photo on right) by Benjamin Zank along the trail from the Sugarlands to Gatlinburg.

The only previous sighting in the Smokies was in Cades Cove.

The Le Conte's Sparrow is an elusive bird that stays hidden in dense grass, often running along the ground. It's most easily seen and studied when flushed from its hiding spot.

Although the Le Conte's Sparrow was first discovered in 1790, the first nest wasn't found until nearly 100 years later.

No wonder it's rarely seen in the Smokies; it looks like the Smoky Mountains is just outside of its normal migration route.

There seems to be some controversy over whom the bird is named after.

John James Audubon named the bird after his friend, Doctor Le Conte. It's generally believed that he meant John Lawrence Le Conte, although some feel that he was referring to another John Le Conte, also a doctor, and John Lawrence's cousin.

If Audubon intended to name the bird after his cousin, then it's possible that the bird is named after the same person for whom Mt. LeConte is named after.

However, this apparently isn't settled either.

Most people, including the USGS, assume that Joseph LeConte, the famous geologist and charter member of the Sierra Club, is the man for whom Mt. LeConte was named. However, that claim has been challenged in recent years. The authors of A Natural History of Mount Le Conte, and the Georgia Encyclopedia, both claim the name honors Joseph's older brother, John, who was famous as a scientist and as president of the University of California, at Berkeley.

The confusion, obvioulsly, comes from too many famous people named Le Conte with scientific and naturalist backgrounds and who lived during the same time period.