Catching up with Mark Beaumont 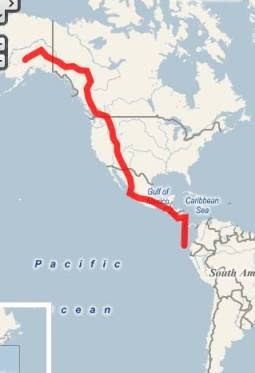 Earlier in the year I wrote a blog about a Scottish cyclist who had just embarked on a trek to ride a bicycle from Alaska to the southern tip of South America.

In late May, Mark Beaumont began his epic journey to cycle from Anchorage, Alaska to Ushuaia in Southern Argentina.

Before leaving Alaska, he took three weeks off his bike to climb Denali (Mount McKinley), reaching the summit on June 16th. He also plans to climb Aconcagua while in Argentina. The two mountains are the highest peaks in North and South America.

Earlier this week Mark reached Panama where he boarded a Russian cargo ship that took him through the Panama Canal and onto Ecuador (there is no road joining Panama in Central America to South America).

In all, Beaumont will be covering more than 15,000 miles as he traverses the Trans-American Highway. His entire adventure is being filmed by the BBC for an upcoming television show. He hopes to finish his trek by February of next year.

Mark usually posts once every other day. His Cycling the Americas blog includes lots of great stories and photos.